Hi all! Just wanted to post an update to let you know that my CHAOS street team members have been chosen! It was SO hard making the selection, since you know how much I love each and every one of my readers, but I had to keep the group small in order to get the okay from my publisher to provide the members with e-ARCs. If you weren't selected, please don't be discouraged -- I'm going to create a new street team for each book release, so you’ll have plenty opportunities in the future! <3
Posted by Unknown at 12:43 AM No comments: 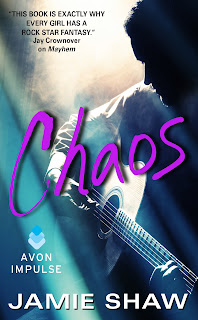 The CHAOS audiobook narrators are officially official, and they aaare.....

Why is it SO FREAKING COOL that Khristine is narrating CHAOS, you ask?

It's because my love of romance, my love of reading, all started with Julie Kagawa's The Iron Fey series, and Khristine narrated those books. Now one of my books is being narrated by the same person who narrated the series that changed my life (which remains one of my favorite series to this day), and that just blows. my. flipping. mind.

As some of you may recall, Khristine was originally signed on to voice Dee in RIOT, but she had to back out due to some unforeseeable circumstances. It ended up working out for the best, though, because Arielle DeLisle stepped in and she ROCKED IT. She was the perfect Dee (seriously, just listen), and honestly, Khristine makes for a much better Kit. ;)

Khristine is finishing up her recording of CHAOS this week, and I can't wait to hear the story in her voice, because I know she's going to knock Kit Larson's fun, snarky, rock star personality out of the park. Between Khristine and Andy, this audiobook is going to ROCK!

Only a month and a half left until you can get CHAOS in ebook or audiobook formats! Out next month, on July 21st!

I hope you're as excited as I am!!