Most of these are favorite bands of mine that I listened to a lot while writing this book, but these specific songs are ones that stood out because their lyrics made me go "OMG RIOT!"

Hope you enjoy!  Let me know what you think!

And I wanted to write a post about everyone’s favorite best friend, Dee.  ;)  Dee is the heroine in RIOT, and she's definitely a handful.  Those of you who read MAYHEM know that Dee is a girl who says and does whatever the hell she wants.  She’s promiscuous, she’s outspoken (understatement of the century), and she makes no apologies.

And, that being said, Joel is Joel.  This is a book about two characters who are players, who view sex as something fun to do, a game to play.  This book is a *lot* steamier than MAYHEM, with a much rawer storyline.  It still has humor and fun times with the band, but we see things from *Dee’s* point-of-view, and Dee’s view of the world, not to mention her moral compass, are drastically different from Rowan’s.

This review (which I absolutely ADORE) does a great job at describing the differences: http://freshfiction.com/review.php?id=50347

I, personally, grew to love Dee by the end of the story.  Like seriously, really love her.  And I grew to love Joel, even though when I first started writing MAYHEM, I never imagined him being a hero in his own book.  These two damaged characters got a story that felt like it was always meant to be written the exact way it turned out, and it is a story I am immensely proud of.  I’m proud of my characters and how they grew.  I’m proud of myself for sticking to my guns.  And… yeah, I just really freaking love this book.

And I hope you will too.

Posted by Unknown at 9:33 PM No comments:

With only ONE WEEK left until RIOT releases, it's officially time for the RIOT blog tour!  Stop by the following blogs for promo posts, giveaways, reviews, and more!

Posted by Unknown at 8:10 PM No comments:

January 20, 2015 will forever go down as one of the best days ever, and I bawled so many times that day.  Because things like this don't happen to debut authors.  And I never thought they'd happen to me.

That day, in the eeearly hours of the morning, the release-day madness all started with this: 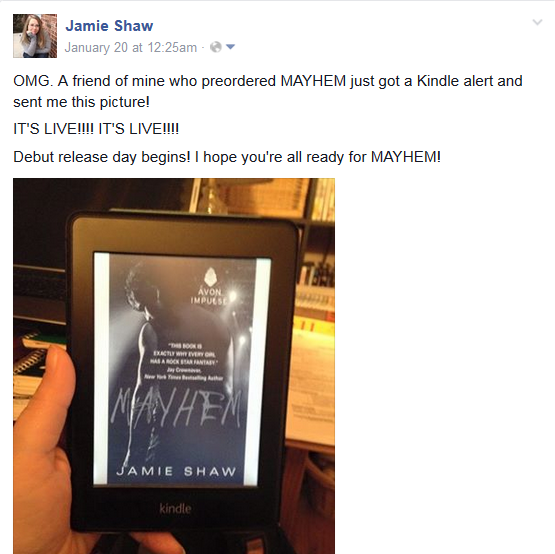 Then, seventeen hours later, this happened: 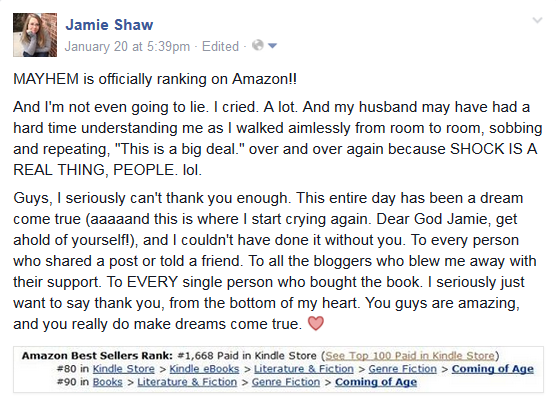 And I wasn't lying.  I did cry.  A lot.  I'd gone into this publishing venture with next to no expectations, so to see my book -- my book, that I'd worked so hard on -- climbing up the ranks... to know that people were reading it, that a lot of people were reading it... it was overwhelming.

Then, MAYHEM made the New Adult list, and I got to see its cover sitting pretty on lists next to some of my FAVORITE books.  My name was next to names like Jay Crownover, Jennifer Armentrout, Cora Carmack.  I was overwhelmed to the point of tears once again, because looking at my computer screen and seeing that with my own eyes... it felt too big -- too big to have even hoped for.  And yet here it was, really happening. 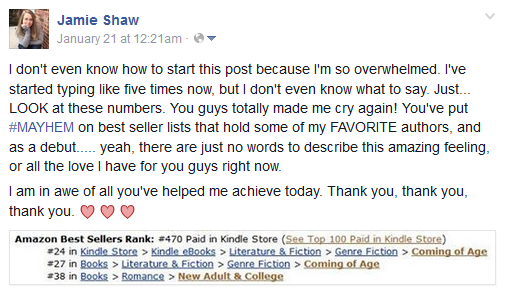 I still can't truly describe that feeling.  I felt like a fucking rock star.

We. Were. Freaking. OUT.

At its highest point (day 2), MAYHEM ranked #193 of all paid Kindle titles.  And this pretty much sums up how I felt (except imagine a lot more screaming, bawling, and flailing): 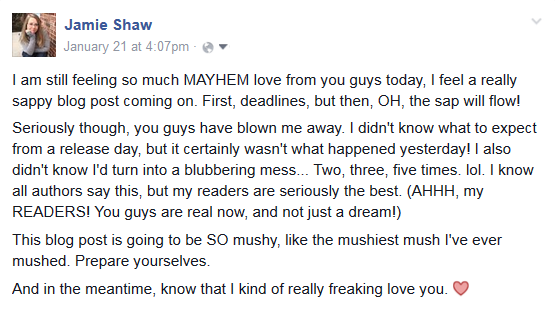 And you know what?  This blog post hasn't been nearly mushy enough.  That first week of my debut, I started getting messages from readers, real readers who loved my characters, my story, my writing.  And every single one of those messages was the best thing ever.  I had a reader actually tell me that I made *her* day when I responded to an email she wrote me........

UM, GUYS.  You make my day every time you message me!  When you freak out and talk about your ovaries exploding because you fell in love with one of my characters, I laugh my ass off and FALL IN LOVE WITH YOU.  I'm a total fangirl over my fans.  You guys are AMAZING.

I know that eventually, after I've released a lot more books and have had a lot more experiences like this, these feelings might start to fade, and release days might start to seem less magical.  But dear god, I hope not.  And if they do, I hope I never forget.  I hope I never forget what it felt like to get my first message from my first reader about my first book when it came out on its first day.

So..... even though this blog post still hasn't been nearly mushy enough, I'll end it by simply saying thank you.

You guys are the real rock stars.