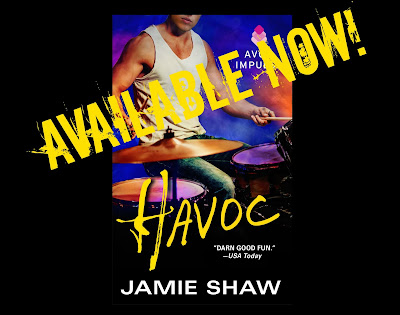 Mayhem Series fans have been waiting almost two years for the drummer of The Last Ones to Know to get his happily ever after, and he finally gets it with Hailey Harper—the little cousin of his bat-shit crazy ex-girlfriend.

Here are some things I think are especially cool about this story:

Just check out this synopsis!!


I’m going to be celebrating this day with TONS of giveaways and special features in my reader group on Facebook, so join us before you miss anything!

I’ll also be doing a live video in there today around 8:30PM EST, so stop by and say hi! Keep an eye out for fun posts throughout the day—when you’re not busy devouring Mike’s story, of course—and let me know what you think of HAVOC once you’re finished!! Most of my advance readers said Mike became their absolute favorite of all the Mayhem Series boys.... I can’t wait to hear if you’ve switched to #TEAMMIKEMADDEN too! <3
Posted by Unknown at 2:14 AM